We welcome the opportunity to give you a first impression of our practice in Munich’s city centre.

We want you to feel well looked after at our practice from the very outset. Our friendly colleagues will also ensure that that you will immediately feel at ease when you come through our doors. The first priority of our natural health practitioners and the entire team is to provide patients with the treatment to meet their needs. As our patient, you are always at the heart of all that we do.

The THERAPIEZENTRUM KÄSTLE is located on the Sendlinger Straße in the historic centre of Munich. Its central location means that we are particularly easy to reach by public transport. Simply get off at the Marienplatz or Sendlinger-Tor-Platz. Many different suburban and underground trains as well as trams and buses stop there.

If you are coming by car, there are parking spaces and multi-storey car parks close to the treatment centre, which charge during business hours. For generous parking spaces with plenty of light, we recommend the "Oberanger" parking place. 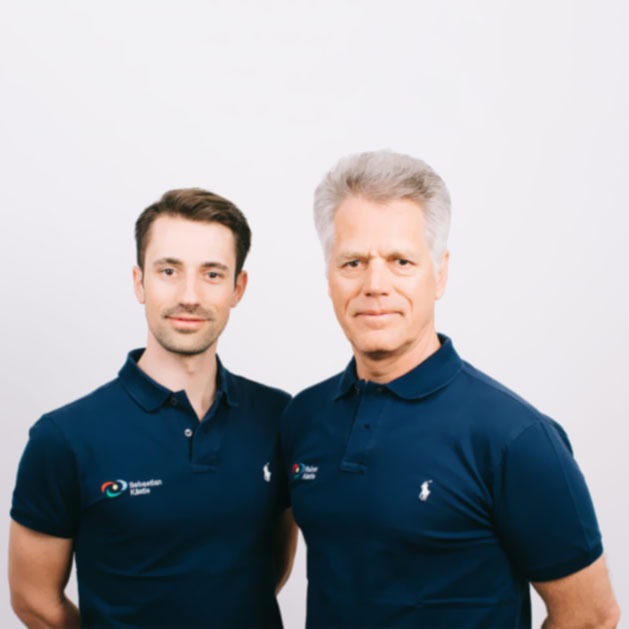 This gives you an overview of the many different services provided by our THERAPIEZENTRUM KÄSTLE in Munich – Wallgau.

The work of our natural health practitioners is based on a treatment concept developed by us from many years of experience in our practice. This offers you a broad range of natural medical procedures and conventional and holistic diagnostic tests.

However, you as the patient are always at the heart of all we do. There is only one reason why we continually seek the best possible diagnosis and treatment – your health. Our primary goal is to fully diagnose the underlying causes of your illness. Based on this, we develop a treatment strategy tailored to your particular needs. Our holistic range of diagnostic tests and treatments combines traditional and modern medicine for a successful outcome.

We offer you an innovative concept comprising osteopathy, neural therapy, homeopathy, natural medicine and energy medicine. This makes use of treatment synergies that stimulate the body’s self-healing powers and help them restore health.

As the THERAPIEZENTRUM KÄSTLE has long been established, we have built up a first-class network of colleagues and specialists who can be called upon to confirm diagnosis or provide any necessary treatment.

Iridology is an old traditional method of diagnosis developed over the years to a sophisticated level by natural health practitioners such as Josef Angerer. It can help forestall diseases when clinical tests and findings are still negative.

We work with Kirlian diagnostics at our treatment centre in the historic centre of Munich. The Kirlian image is mapped from 20 meridian junctions on the hands and feet. As with all energy diagnostic methods, Kirlian photography is based on clinical diagnostics.

A number of diagnostic and differential diagnostic tests are carried out externally, for example, imaging procedures such as MRI scans, X-rays or CT scans and other visual representations. If the need arises, we can arrange an appointment for patients at short notice.

Osteopathy is another focus of our practice in Munich’s city centre. Osteopathy is the modern development of two of the oldest methods of treatment known to man – massage and manipulation. It ranges from osteopathic diagnosis to osteopathic treatment, which covers structural and functional problems in the body.

Extraordinary healing can be achieved by injecting a local anaesthetic at pain points, into the associated area, the vascular system and into what are known as interference fields. Neural therapy is used in particular to treat pain of orthopaedic and rheumatic origin, neuralgia, all forms of headache, allergies and vascular disorders as well as in interference field diagnosis. When combined with osteopathy and homeosiniatry, neural therapy may produce causal healing in spine and joint disorders in particular.

We treat many types of pain, such as pain due to arthritis, rheumatism and other spine and joint disorders, in parallel using acupuncture. This treats not only the pain but also the cause. Moreover, the induced stimulus activates the body’s self-healing powers, with the effect that the body is specifically stimulated to regain balance. The body can heal and the general constitution is strengthened.

Naturopathy is an umbrella term for various methods of treatment that rely on natural remedies to treat disease or improve well-being. This method of treatment is used in particular at our Sendlinger Tor practice. Naturopathy is based on empirical medicine and has been scientifically refined. It does not usually include homeopathy – this is a separate system based on altogether different principles. Naturopaths use physical stimuli (light, air, heat, cold, movement/rest) und herbal ingredients – modern phytotherapy (herbal medicine). Cleansing and detoxification are one area of naturopathy.

Homeopathy is a holistic method of treatment that seeks to address the whole person mentally, physically and emotionally. It is based on three pillars: the law of similars, the remedy picture and the potentisation of substances. Homeopathy is based on the premise that a disease with certain symptoms can be cured using an agent that causes similar symptoms in a healthy person. The substances administered are potentised and individually selected for each patient.

The detection and treatment of energy flow disturbances or disorders of energy systems such as the meridian system of traditional Chinese medicine (TCM) are an important pillar of holistic medicine. Energy medicine includes not only acupuncture but also homeosiniatry, a combination of acupuncture, neural therapy and homeopathy.

Infusions may be part of a treatment plan and are often used in our practice as a supplement to other treatment. They allow us to support your body and specifically affect cholesterol levels, arteriosclerosis, the hormone system and liver metabolism, for example.


We welcome the opportunity to give you an initial insight into the CITYPHYSIO practice for physiotherapy and rehabilitation in the historic center of Munich.

The practice in the Asamhof was first established in Munich’s city center in 1999. In 2009, we expanded the practice with the addition of medical training therapy – the CITYPHYSIO health center.

This allows us to offer our patients not only a complete range of physiotherapy and rehabilitation treatments but also supportive training therapy, through which you learn how to actively continue and expand the success of your treatment.

Using this combination of therapy and training, the therapists and sports scientists at CITYPHYSIO will work together with you and help you rapidly achieve your individual goals. Your physical and spiritual well-being will be accordingly restored and substantially enhanced.

Trained as a natural health practitioner at the Josef Angerer School in Munich. Employed as a paramedic in rescue services and disaster relief. Trained as a specialist in various naturopathy practices.

Own practice in Munich since 1985, with attached physiotherapy and medical training therapy, in joint practice with my son Sebastian Kästle since 2014.

Teacher of osteopathy at the Josef Angerer School, Munich. Chair of the South Bavaria Working Group on Osteopathy, Chiropractic and Neural Therapy.

Founding and Chair of the Munich Osteopathy Forum. Under the aegis of this organisation substantially involved in the development of osteopathy in Germany. Numerous publications, talks and workshops.

Trips to healers and naturopathic treatments around the world.

Licensed to practise medicine as a natural health practitioner by the Bad Tölz Department of Health, 1982

Licensed in the United Kingdom and territories as an osteopath by the General Osteopathic Council GOSc, London, 2000

Trained as a natural health practitioner at the Lotz Institute of Natural Health Practitioners and the Munich Naturopathy Centre.

Licensed to practise medicine as a natural health practitioner by the Starnberg Department of Health in 2012 and in joint practice with my father Rainer Kästle since 2014.

Lecturer in orthopaedics and the musculoskeletal system at the Gauting Homeopathy Academy for 6 years.

Physiotherapist at the Munich Olympic Training Centre and medical care of the National Judo Team of Germany.

Who we are and what we do

A professional, friendly and committed team is ready to welcome you at our THERAPIEZENTRUM KÄSTLE in the Asamhof in Munich’s city centre. Our goal is to find the best treatment for your health problems and needs.

The holistic treatment of the musculoskeletal system has been a major focus since the practice first opened its doors in 1989. The naturopathy and osteopathy practice has been developed over time into a treatment centre that also offers physiotherapy. When Sebastian Kästle joined his father’s practice in 2008, the centre was able to offer device-aided medical training therapy. His particular treatment specialty is sports care for top sportsmen.

Both father and son attach great importance to ensuring that their entire team regularly attends training courses in order to provide you with the best possible treatment.

Children of all ages can suffer from a bewildering variety of problems, illnesses and disabilities. Osteopathy may prove to be a very effective form of treatment in many of these cases, ensuring children not only become but also remain fit and healthy.

The dramatic increase in allergies is a cause for concern for an increasing number of people. Patients with an allergy are looking to naturopathy practices in particular for lasting relief. We therefore treat any possible regulatory system dysfunction and eliminate susceptibility.

We also use osteopathy for disorders affecting the jaw joint, considered the most used joint in humans. It enables us to remedy not only pain in the jaw joint, teeth grinding and headaches but also ear noises such as tinnitus (ringing in the ears).

If the jaw hurts 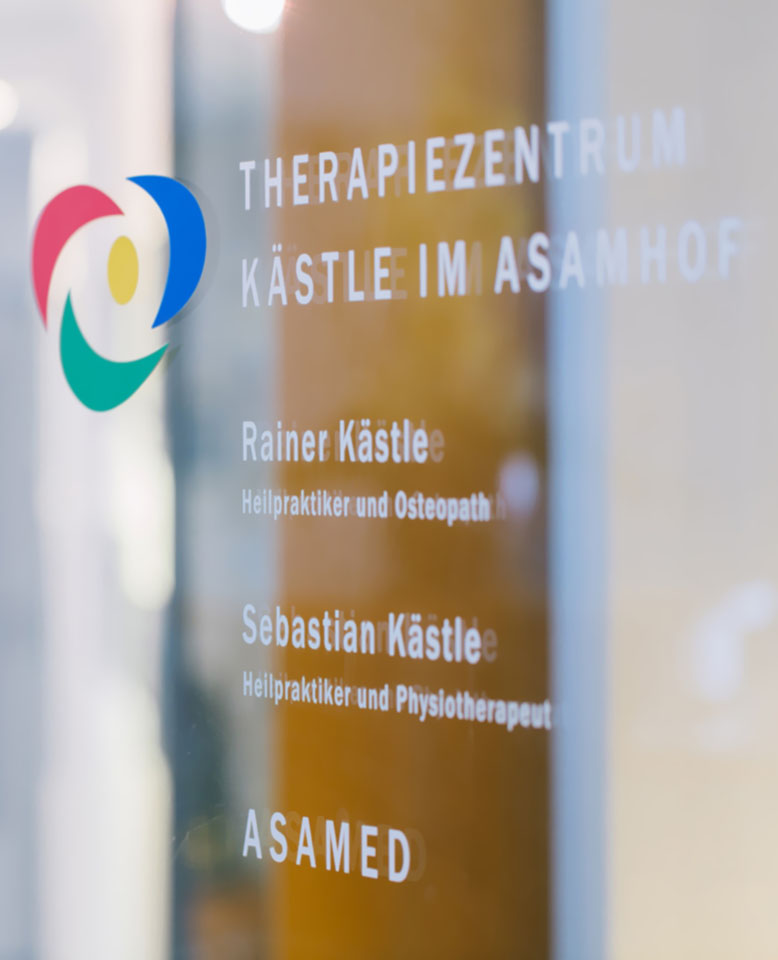 The naturopathy and osteopathy practice was opened by the natural health practitioner Rainer Kästle in the Augustinerhaus in Munich’s city centre in 1985. There was a strong focus on the holistic treatment of the musculoskeletal system even in its early years. The growing practice soon required larger premises, which resulted in the move to its present location in the Asamhof directly beside the Asamkirche in 1989. The practice has been developed over time into a treatment centre. In 1999, for example, it was expanded by the addition of a separate physiotherapy practice. Over the years, a number of internationally renowned osteopaths have treated patients in the practice, providing excellent opportunities to share experience with one another. Various working groups and training course providers have held meetings in the practice over the years. The founder’s son, Sebastian Kästle, joined the practice in 2008. As a natural health practitioner and physiotherapist, he strengthens the continuity and further development of the treatment centre. Under his direction, the range of treatments on offer has been expanded with the addition of device-aided medical training therapy. One of his treatment specialties is the sports care of top sportsmen. We both attach great importance to ensuring that all the members of our practice team regularly attend training and advanced training courses. Together, we are delighted to have the opportunity to be actively involved in ongoing changes in medicine and to be in the position to offer you a concept of modern holistic medicine we ourselves have developed.

THERAPY CENTER KÄSTLE is located in the inner city of Munich, between Marienplatz and Sendlinger-Tor-Platz. Our therapy center can be accessed without barriers. Stop Marienplatz or Sendlinger-Tor-Platz (suburban trains and subways, tram and bus connections). Parking (paying) and car parks in the immediate vicinity. Car Park at the street Oberanger (Parkhaus am Oberanger) within 5 minutes walking distance.